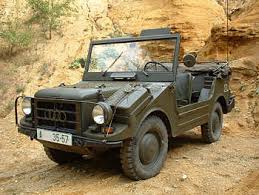 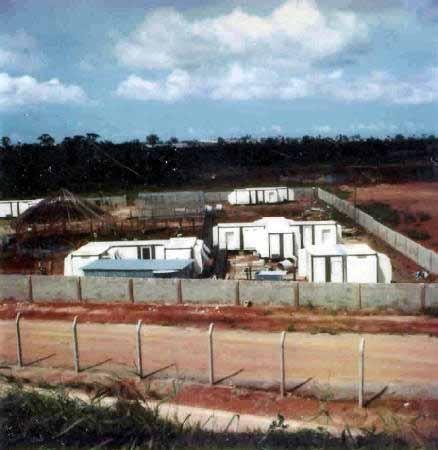 Note: All of the pictures taken on this trip (and many others) where destroyed during a fire in the Croc Bar in Lagos. As luck wanted, in January 2009, I got an e-mail from Guenther Heller, one of the 3 in the blue VW heading to South Africa. He sent me a few pictures taken from the section Tamarasset to Fort Lamy, I joined them. The other 2, Heino and Erwin, I still have to find.
Slideshow: TOGO 1969 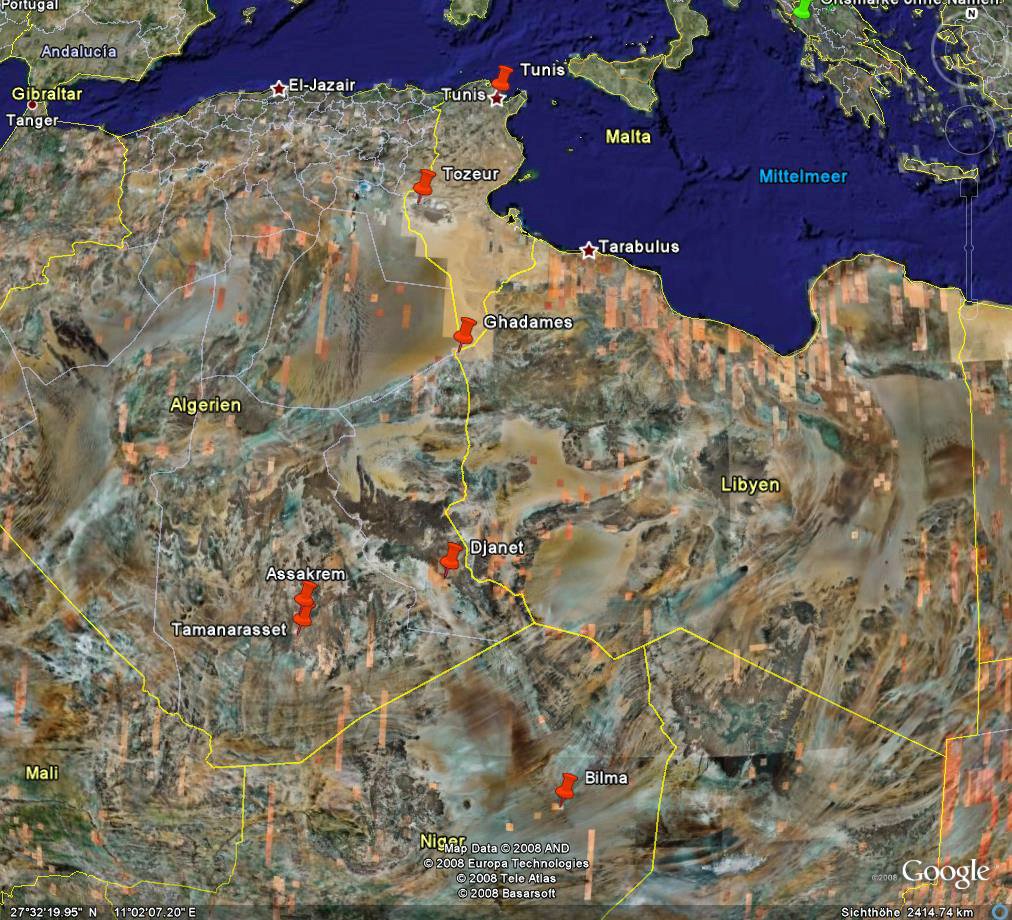 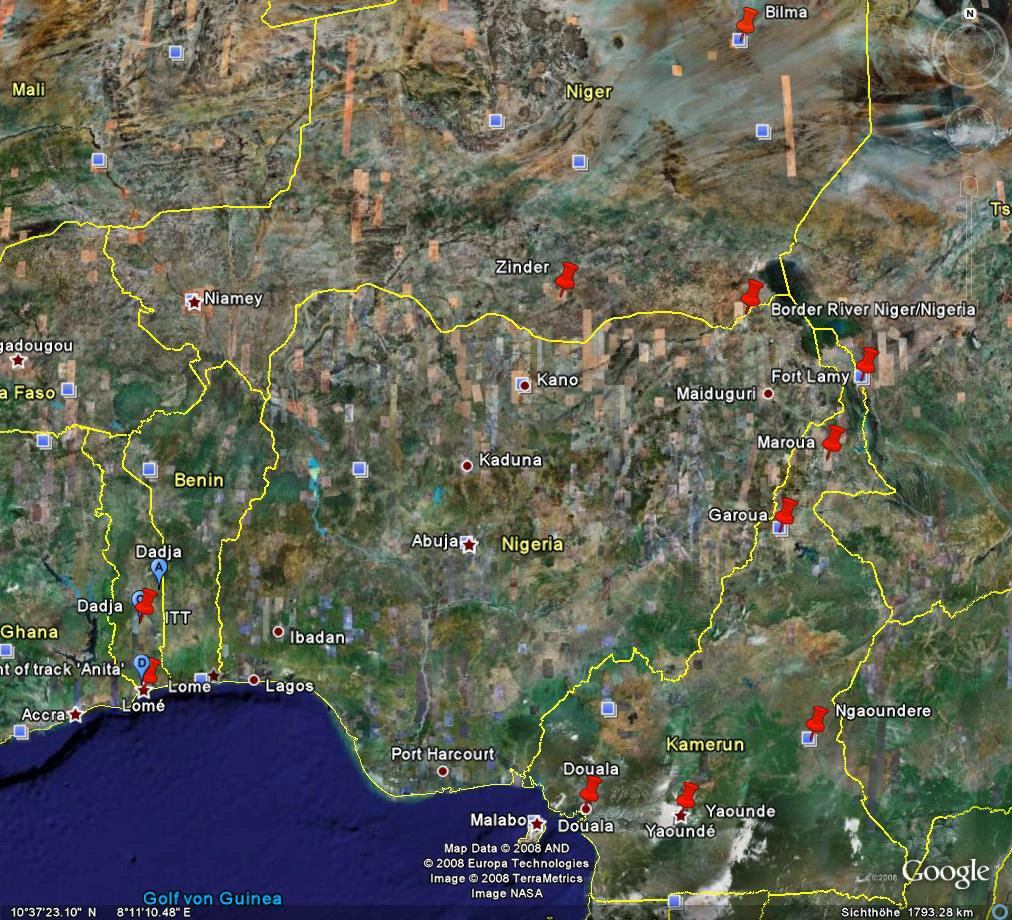 After the successful finish of the Textile Academy in Reutlingen, I did not feel like going to work straight away. I had the idea to hike through Algeria, Sudan, Tschad, Saudi Arabia and then somehow to Australia. I already criss-crossed the Sahara 3 times before, by hitch-hiking and always alone and each time asking myself "What the fu'k I'm doing here!" Another of my buddies, planned to visit the Sahara with his father in their Landrover. He offered me a lift to Tamanrasset. Great!.
The trip from Tunis, In Amenas, Mount Assakrem to Tamanrasset went relatively smooth. Further towards Djanet. Heat, sand and shoveling (digging out the vehicle) where part of a Sahara trip in those times. No paved roads! In Tamanrasset I searched for a suitable transport going down South but Even trucks where rare. Finally I met a couple of guys, Guenther Heller, Heino Rothballer and Erwin travelling in a VW Bulli to their home in South Africa. The bus was already battered from the ongoing trip and needed repair.I offered my services and we fixed the vehicle as good as it was possible under the circumstances. 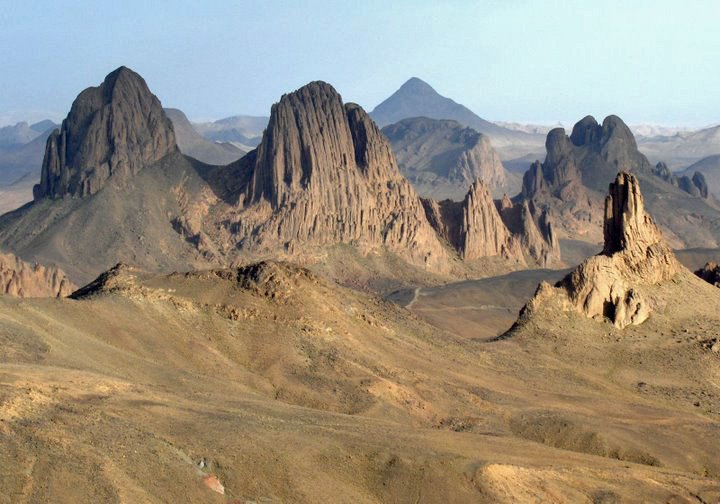 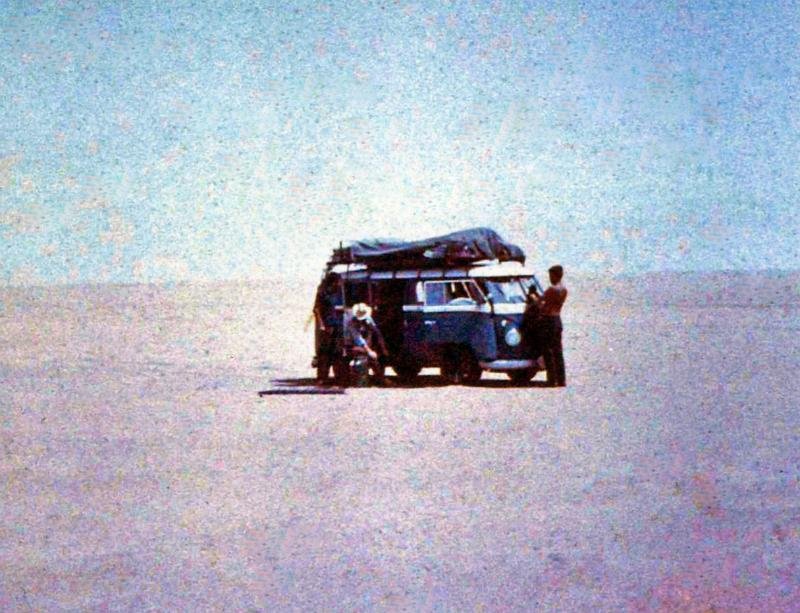 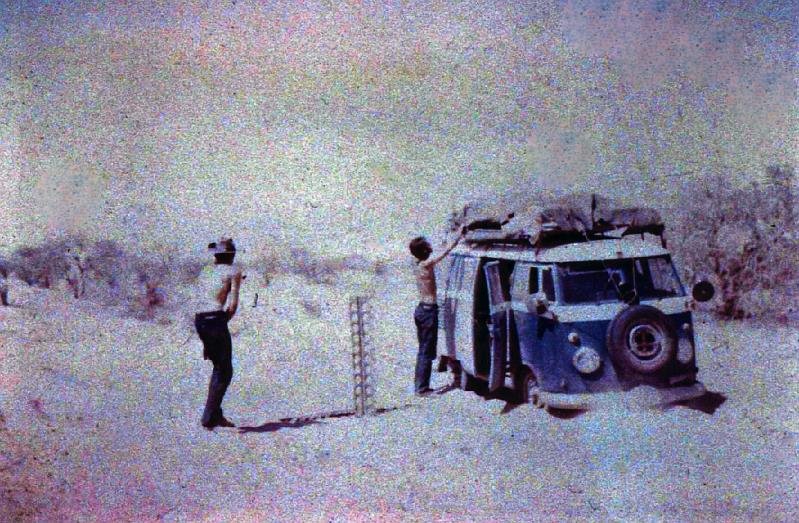 In turn, they offered me the last seat against a cost sharing. That was OK with me. They intended to travel via Bilma, Zinder, to Kano (Nigeria). Their final destination was South Africa.
Reaching Zinder we decided to head towards Tschad to avoid trouble in Nigeria. We feared that the on going Civil War (Biafran War) could hamper the onward trip to South Africa. So, Lake Tschad and Fort Lamy (today N'Djamena) were our next targets. This route seemed to be logical but proved to be tremendous difficult. The region is very remote, leading along the Northern border of Nigeria.

A very fine sand made moving the vehicle along a nightmare. Every few meters we got stuck to the axels and digging it out was the only way to proceed. A lot of sand dunes with sudden steep descents into small "Oasis"; and than, naturally, up again. The fine sand was everywhere and our progress was sometimes only 5-600 meters a day. Of course, we carried perforated steel panels to get the vehicle over the worst stretches but they became so hot in the sun, that we could not handle them anymore. Day time temperatures climbed to 50Â°C and the burning heat and wind, did not allow us to anything after 11 am. We tried to make headway during the cold nights and tried to sleep during the hot hours.
The immense stress on the clutch, caused by forcing the vehicle up dunes and out of sand pitches, damaged it and we had to change it 2 times, under appalling conditions. Digging trenches in the hot sand to lower the car engine, changinge the clutch and mounting the engine again was frustrating and exhausting. Luckily, the "South Africans" where very well equipped and had all the necessary spare parts on board. The sand near the Lake Tschad became even finer. This made progress it quite an ordeal.

We struggled already 4 weeks and I considered to continue by camel should we come across a caravan. But than I could not let the guys alone (not many camels around anyway!).Finally we reached Fort Lamy (Tschad) completely naked. The first house we came across was occupied with German aid workers and there we got the absolute best beer I ever had! Than I parted company and continued on my own again. 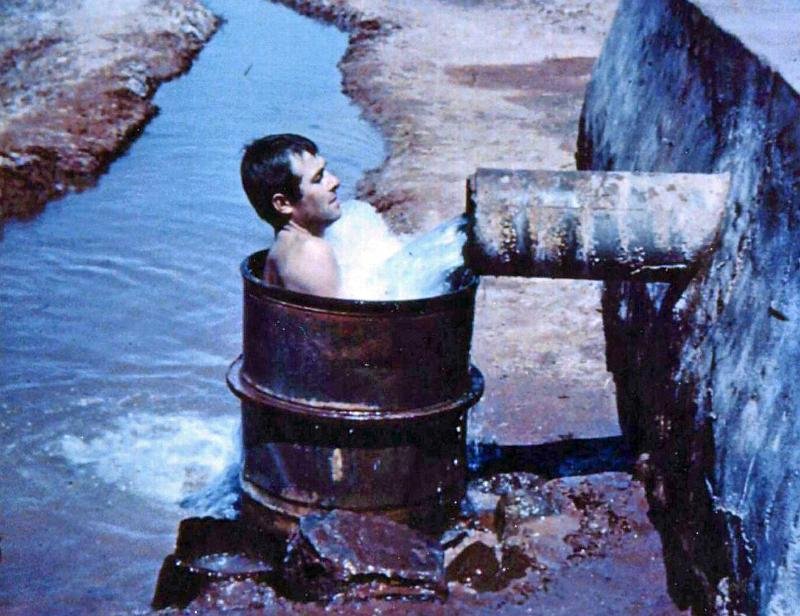 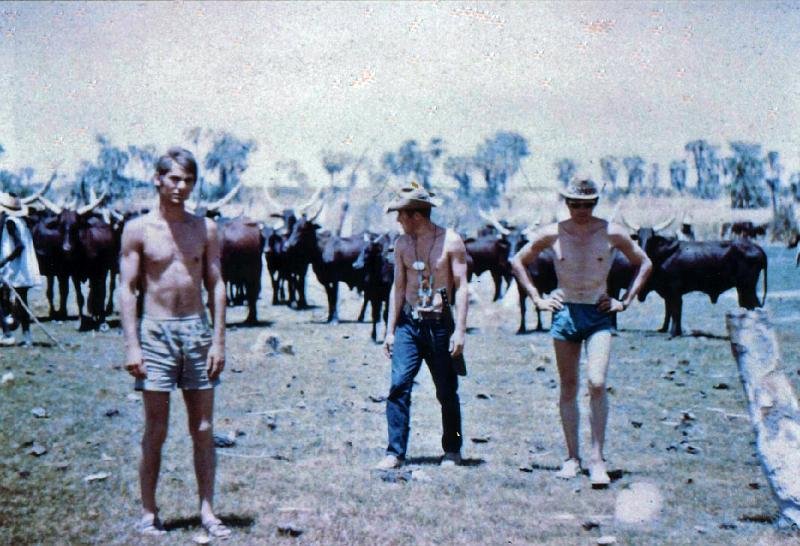 The journey on top of a lorry down south to Douala 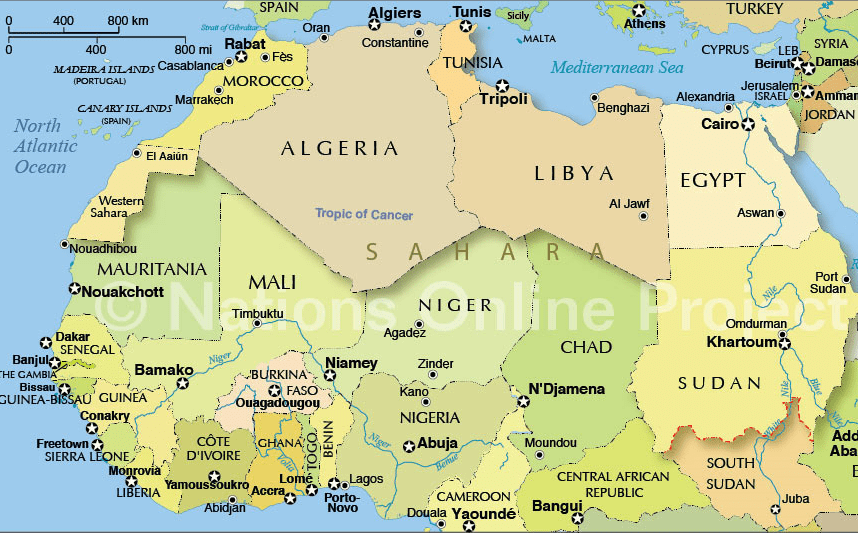 In Fort Lamy (today N'Djamena) I left my companions alone and was looking for a new transport, best a truck, to the South. I had no plans. After some days nosing around I got in contact with a truck driver and his crew, heading for Yaounde, the capital of Cameroon. I made sure he was mentally healthy, because I had an experience with a "Crazy One" on an other Sahara Crossing! We arranged to meet him with his truck in Cameroon, after swimming through the Logone River, the border to Chad and Cameroon. This because I did not have a Visas for either country and I had to dodge the Border Guard. We went off towards Maroua and Garoua. Before each police check point, I had to get off the truck and make my way around them through the bush.
I was illegal in the country and this was sometimes tricky! With my white face I was easy to be picked up! It was a long, dusty and hot trip on top of the truck. We passed N'Gaoundere and finally reached Yaounde. The drive through the rain forest was, for me, a new experience and it was awesome. 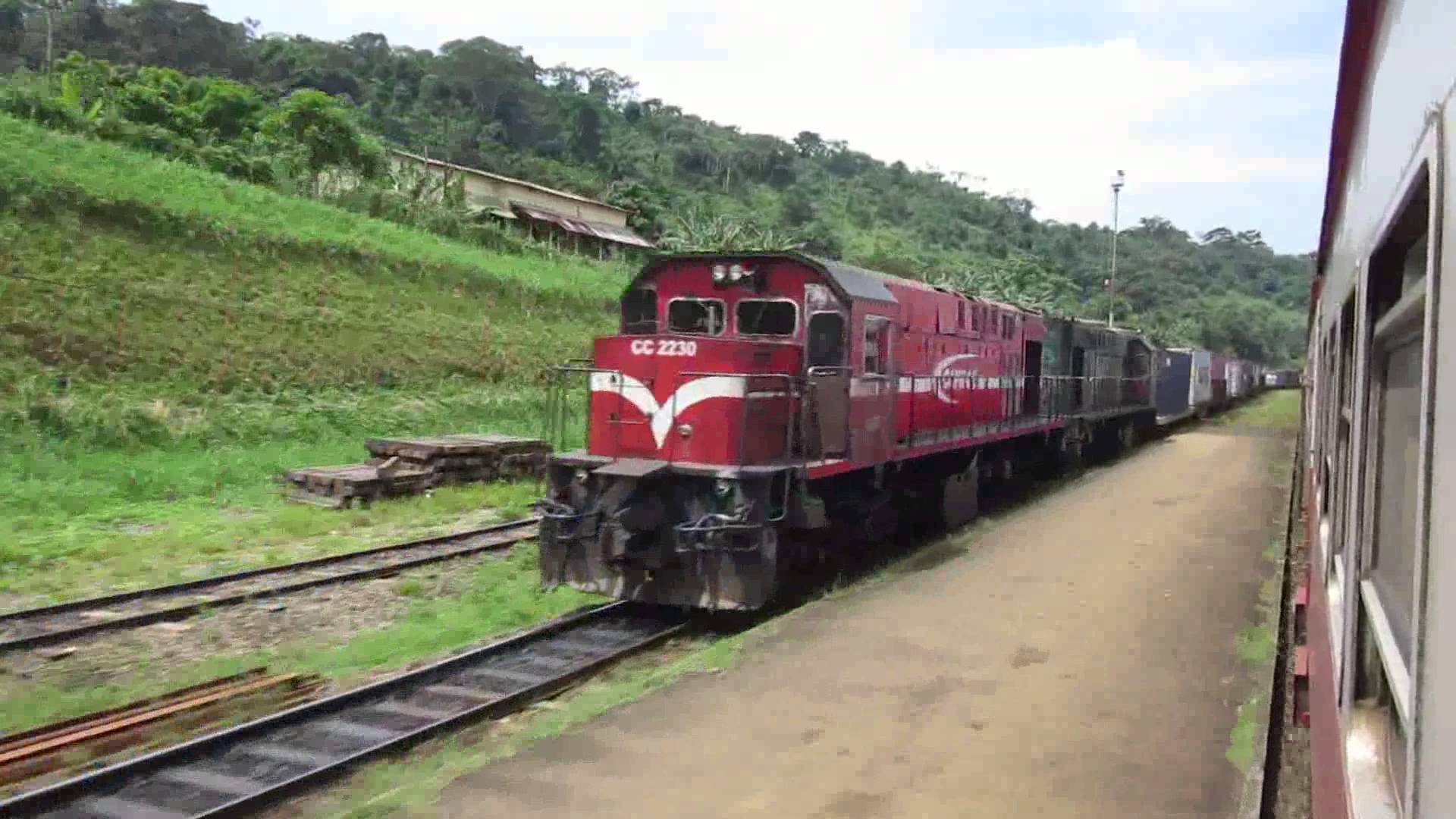 Yaounde was quite an experience, beer, nightlife and all what I missed for the last 8 weeks! Unfortunately my luck ran out when the police arrested me in a shop where I wanted to get some new stuff. I got locked up but the police chief seemed to like me and we had a good time together. Finally he arranged a kind of "Visa" for me and I got on a train to Douala.On the train to Douala I met a girl. On arrival, she told me that I to stay with her. I had no better idea and gladly accepted the offer!
My main problem, I was running out of funds and needed also urgently a job. I found one at the "Foyer des Marins" (Seemansheim) where I was in charge of the pool area. Live was looking up again but not for very long! Immigration officers struck. They picked me up at our room and were seriously poised to deport me for want of a genuine visa, giving me 24 hours to pack and depart. I sold my camera and bought me an air-ticket to Lome (Togo). Why Togo? It didn't matter. I didn't had an idea about West Africa anyway and there was no money left for another destination. On top of it, Togo did not ask for a visa for Swiss citizens! There was some confusion at the airport when trying to depart from Douala. One party wanted me on the plane and the immigration guys wanted to see a valid visa. I couldn't care less, enjoyed a beer and waited for the outcome. Finally I landed, in a torrential rain and a pitch dark night, in Lome.