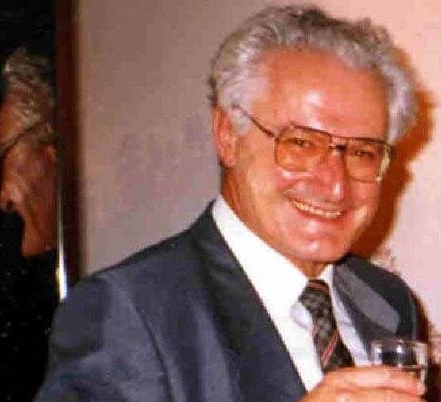 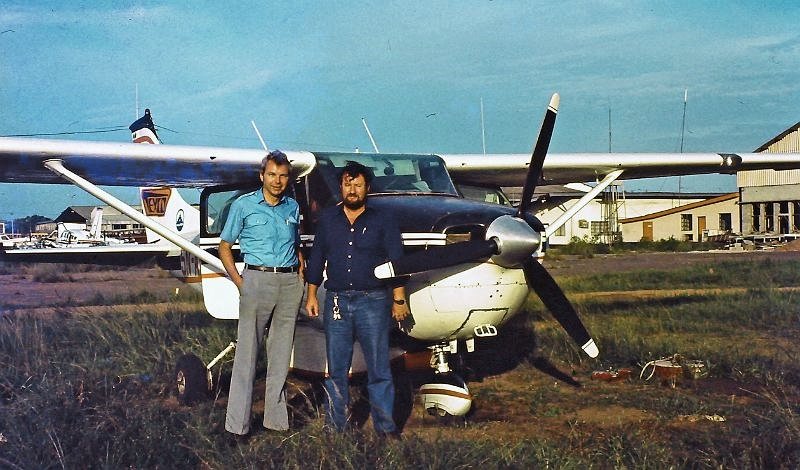 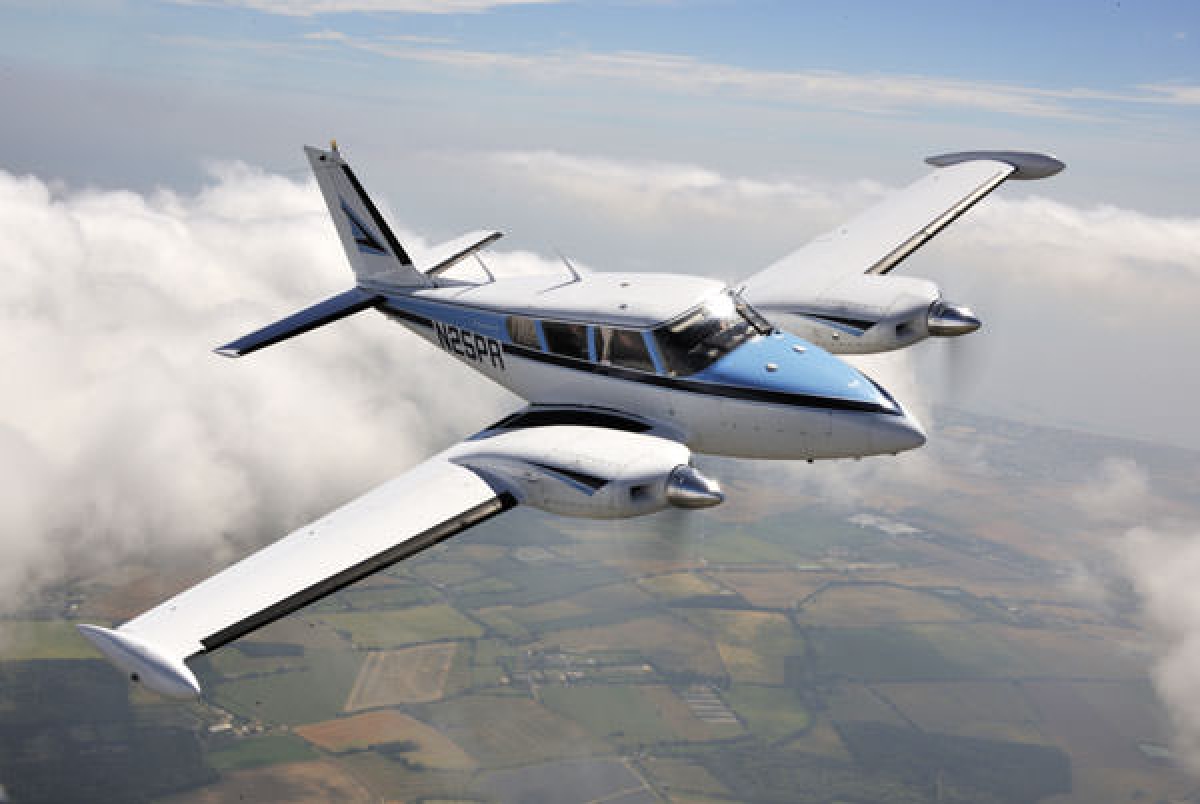 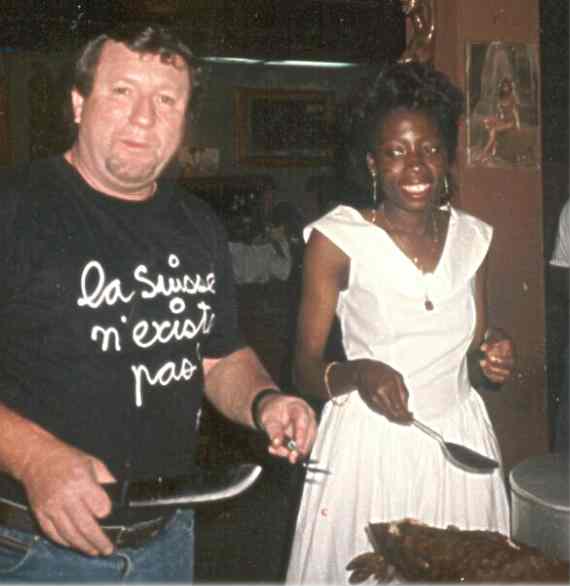 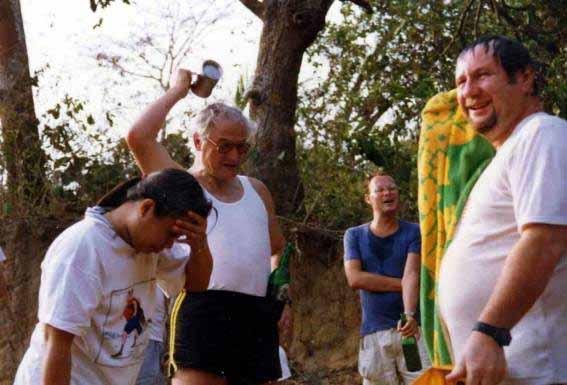 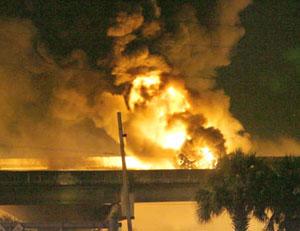 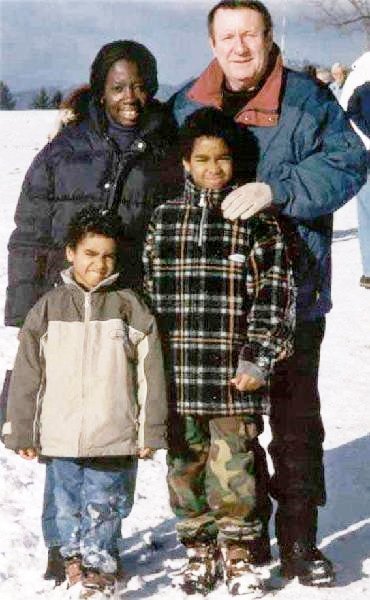 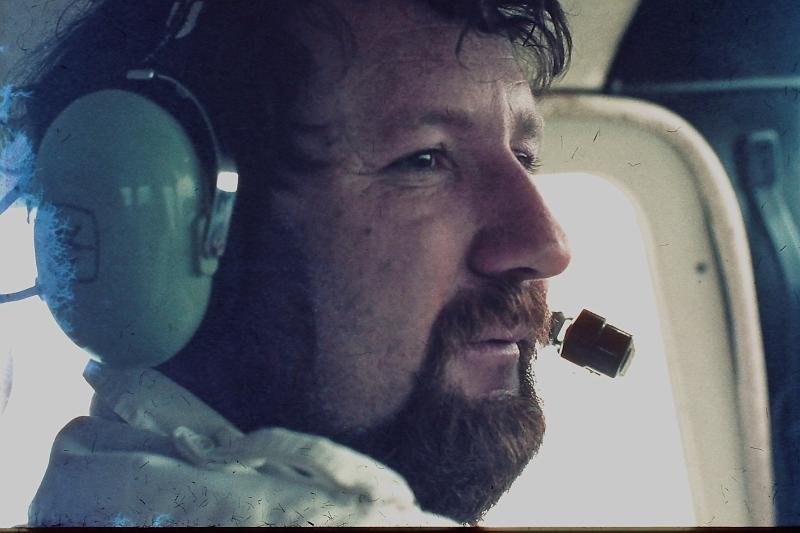 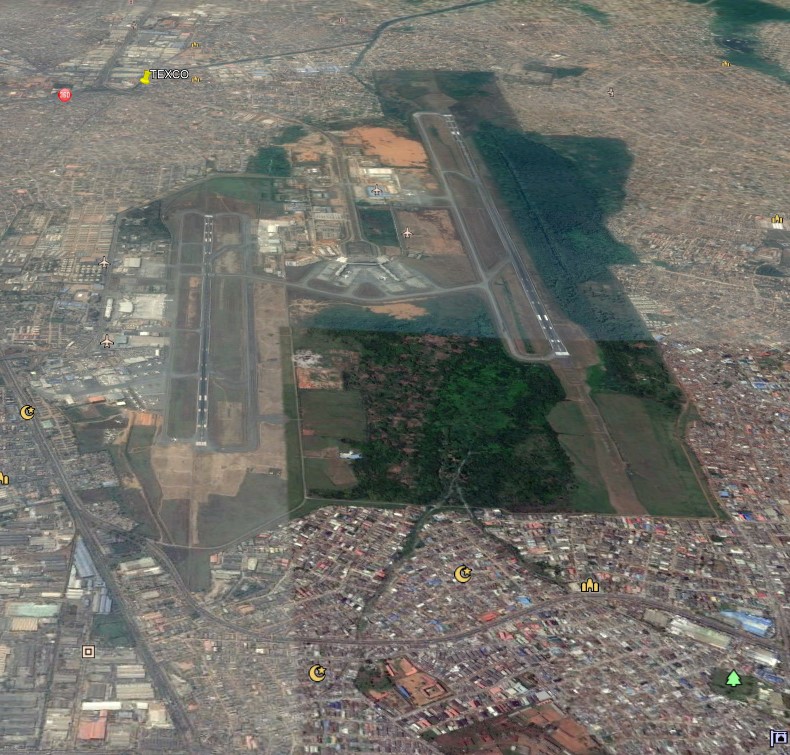 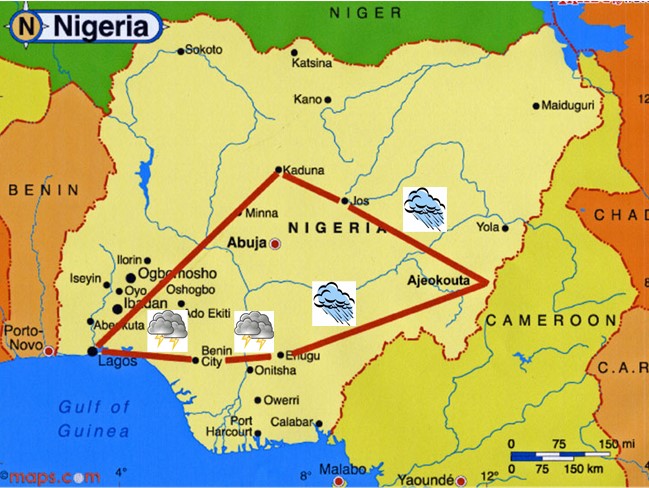 The journey started already bad. Out of bed at 2:30am, outside the pouring rain did little to elevate my spirits. It looked like a lousy day. While taxiing to the holding point of 19L, trouble started:

the aircraft plunged with the undercarriage, into a big pothole hidden under the water and the right tire got blasted. We had to taxi back to fix a new one. Not very funny in the early morning in darkness and rain! Fortunately I had a spare one in the belly-pack and after the replacement we could finally take off. We planned a business trip with stops in Kaduna, Jos, Ajeokouta and Enugu. 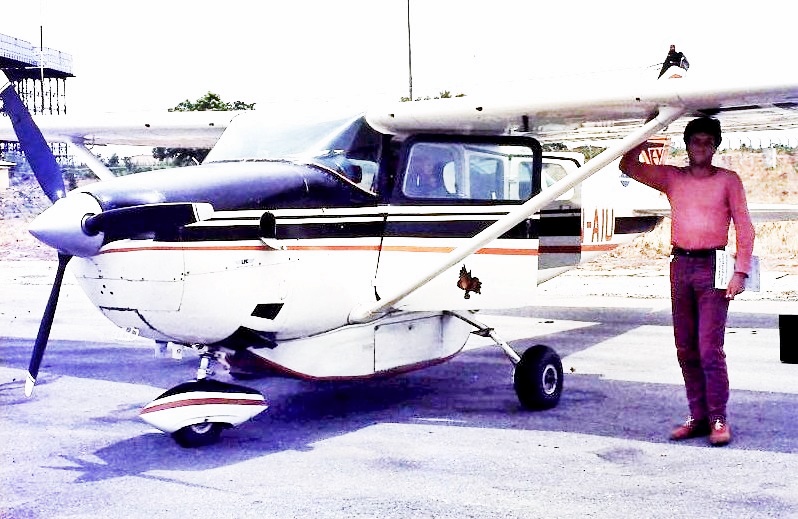 I had five passengers on board, all on their individual businesses. The first leg was to Kaduna where I had to visit a customer. The flight was uneventful, most of the passengers were dosing and I tried to keep awake. As many other times, I congratulated myself that this was not my real profession: erratic working times, long, mostly uneventful flights and never ending (dry!) waiting times at Airports. Trying to refuel in Kaduna proved abortive. There was no "Avgas" available. The fuel drums, I kept for such cases were empty! Since the origin of the fuel (AVGAS) was not without doubts, it had to be passed through a sieve to keep out unwanted particles. Everything seemed OK and I was relieved that all is going as planned. 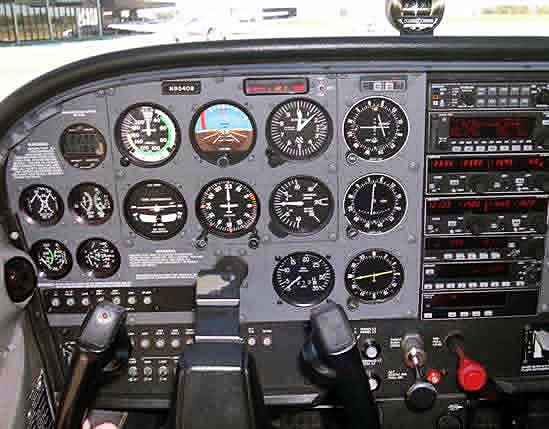 My driver was with the "Landcruiser Pick-Up" on the way, carrying some replacement. Unfortunately it would take him another 12 hours to arrive! I figured out that we could fly on the remaining fuel to Jos and attend to assignments there. In case there was also no fuel available, we still could fly back to Kaduna and wait for my supply from Lagos. Of course this was not exactly our intention. We planned to proceed to the Ajeokouta Steel Plant and from there to Enugu. After landing in Jos and with a lot of persuasion I managed to organize fuel. It was supplied in an old, rusty barrel. While my passengers went to town to do what they had to do, I refueled the plane.

Our party returned and we took off in direction Ajeokouta in a heavy rainstorm. The airstrip at the destination was in a mess. Still, I was happy having located the god-forsaken place. A tricky task without any navigational aids on ground, under IFR conditions. We completed our mission in Ajeokouta and navigated through heavy storm cells, having a very bumpy ride indeed. We finally reached Enugu. There, I had nothing to do than to wait for my passengers. This gave me time to inspect the aircraft. Firstly I noticed a fair amount of water in the fuel. I drained the tanks several times and than I waited anxious for the return of my passengers. The weather looked very threatening. They took their time and the weather deteriorated further while it started to get late. 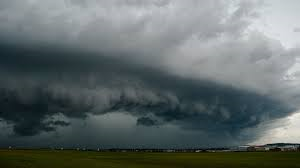 The "Squall Line" came nearer, lightening and thunder came closer. Heavy rain showers started and I was eager to get out before nightfall. Not such luck! My party returned only at around 7pm, it is already dark in this part of the world. During climb out, to 10'000 ft., I noticed a creeping power drop but at first glance I could not spot anything out of the ordinary. After a while a marked drop in fuel flow became apparent. I activated the fuel pump; this solved the problem for the time being. Of course, it was not the cure! Later in the flight I considered a landing at Benin City, but heavy thunderstorms and lack of approach lights at this airport made such an attempt not advisable. Meanwhile my passenger got very quite. The constant, blinding, lightening and the heavy turbulence worried them. I had no time for that, since I was busy keeping the plane straight and level and soon, running! There was a lot of traffic at Lagos Airport and due to the bad weather the situation was, as many times, chaotic. I was still 55 miles out. Radar Approach was, as often, out of order. Most incoming planes were put on hold before cleared to land. To avoid this, I asked, prematurely, for permission to descent to 2'000 feet. This was my usual trick to undercut the commercial traffic and to sneak into the airport without being delayed in a hold. I got the requested clearance, after all, many air traffic controllers where my friends. I always provided them, or their girl friends a lift when I had an empty seat in the plane available. The Canadian Controllers from Radar Approach where my good guests at the Crocodile Bar and could hardly turn me down. This time, I wished they had done so! I wanted to started my descent and reduced power. The effect was quite surprising! The engine quit! It became very silent in the cabin and the faces of my passengers became very pale!

As captain, I was supposed to do something! I pushed the mixture to rich and tried to restart the engine again. Nothing! I still had all my navigational instruments working and could figure out that at the present rate of descent, our landing would be in the middle of the Jungle. Not a very comforting thought. The chances of being found there would be low. To dive into the "cauliflowers" (that's how the big trees are looking from the top), in a pitch-dark, rainy night is a bit scary! I contacted approach control and explained our "delicate" situation. They asked me whether I want to declare an emergency and I declined. All I wanted was clear airspace below 3'000ft. To relax the tense atmosphere, I lightened a cigarette, something I avoided in-flight. The gesture should assured my shocked audience that everything is under control! The battering of the heavy rain, the blinding lightening bolts and violent up-and down drafts counteracted my intention to calm them. There was a missionary among my passengers. He started mumbling to himself, it seemed he was not very eager to meet his maker. I again retried to restart the engine and Hurrrray!!, It worked, albeit the engine sputtered and deliverd only a fraction of its power since the fuel flow collapsed above a certain setting. Anyway, with approx 20 - 30% of power the sink rate flattened and we could, theoretically, reach runway 19L at Lagos. With Radar Approach in operation, we would have been out of the woods. Without it, as it turned out to be, I had to fly first to the final approach fix (LG) and then turn 90°; to execute the final (backcourse) approach.

In the meantime, my friend Eddy Kützner, under way with his Company "LearJet", informed me that the cloud base in Lagos was below minimum. Heavy wind shears would also not help matters. He advised me to exercise extreme caution on my approach. Easier said than done! However I realized that without radar control's help and without ILS, I had to descent in time to brake the cloud base, in order not to miss the runway. I had only one try! The densely populated "Shanty Town" below the final approach path worried me a bit. Crashing into it would have been disastrous. 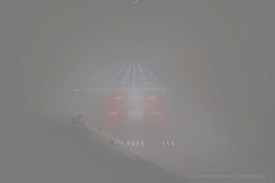 The only navigational help available was the VOR on the approach to Runway 19L. This is a back course approach and (LG VOR) was not very "stable". Approx. 0.8 miles from the threshold I partially broke clouds but still a lot of cloud fragments and heavy rain were interfering with my sight. I spotted the runway ahead and I was too low. Not much, but still too low! The the anxious controller got me in sight and cleared me to land. My answer: "F..k" we can't make it, but what else could I do? There is no alternative airport within reach and outside the storm front! With only minimal power, there was nothing else to other than to land the aircraft without stalling it. I tried to avoid the "Center Approach Lights", keeping slightly to the left. On the right was a drainage channel and I tried to avoid it. "Ignition Off"" and "Touch Down"! The aircraft rumbled over the unpaved ground in front of the runway and suddenly a big "fence" appeared in the rain beaten windscreen. This obstacle was the obsolete ILS installation (sample picture), placed across the approach path and we hit its concrete foundation with the right undercarriage. The sturdy metal construction sheered off the left wing and graced my head, I was knocked off! The aircraft tumbled and came to rest on her back. My tested passengers crawled out of the wreck. Luckily all completely unhurt. Except Lucky-Me! They pulled me out and took me in an old VW bus to a local clinic. As it turned out there was no functioning medical facility at the airport. On the way to a clinic I regained my consciousness and was asked, by my happy passengers: "Where the hell you think you are?"; "Drunk, on the way home!", was my all I could mumble. It deemed to be the logical reply! After stitching my head wound we proceeded home, that meant: The Crocodile Bar.! Back at the Crock Bar with a cold beer, all passengers agreed to pay the their fare for the trip. After all, a landing from which you step away alive is a successful one! Only the missionary, probably pissed off by missing the opportunity to meet his maker, refused to do so. What an exciting day!

Happy End!  The insurance company paid for the loss. I could salvage the costly new avionics and sell it to a Dutchman in Amsterdam. My partner, Mr. Stuessi, agreed to finance a replacement plane. This time a twin engine Piper Navajo with 2 engines. But that's another ("Cuckoo") story!