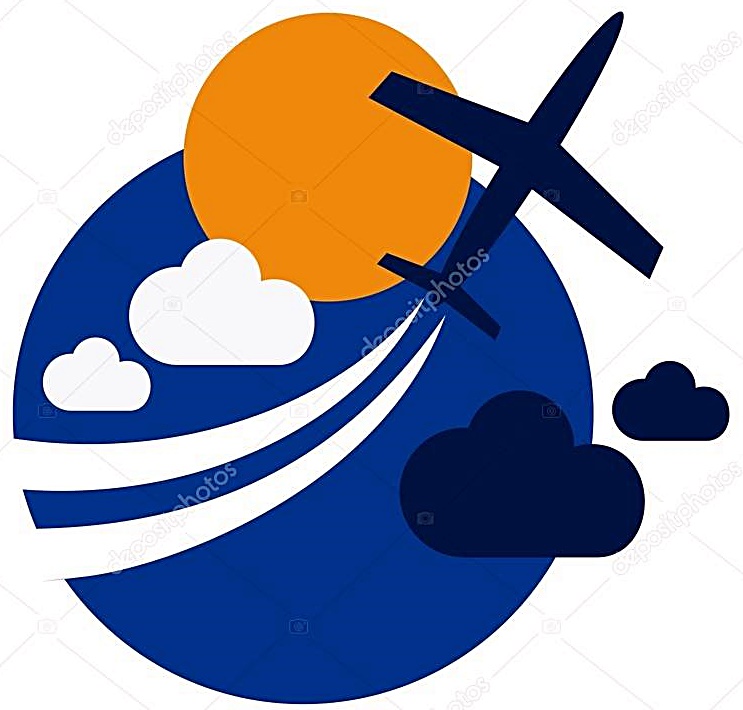 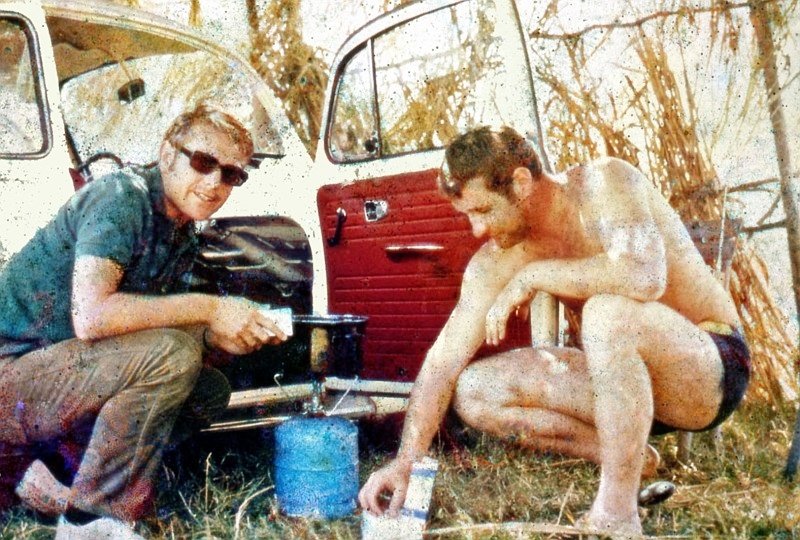 In spring 1968 in the middle of a boring lecture, at the Textile Engineer School in Reutlingen, I cam to the conclusion that I need again some action. Since I already rounded the Mediterranean Sea in my old SIMCA 1000 and did some serious trekking across the Sahara Desert, I wanted something BIG:   India came to my mind and after some thinking I thought a trip to the Indus via Iraq and back over the Khyber Pass with a side trip to th Kashmir, would be quite exciting. On my previous journeys I travelled alone but I suspected that my classmate and friend, Arthur Kessler might be interested.
I was right and so we sat together to sketch our route. The vehicle for the trip would be my new Volkswagen Beetle 1200. If I would have known ... The trip worked finally out like below:

The trip goes counter-clockwise Home - Zagreb - Beograd,... On the way back we headed from Istanbul to Italy (Istanbul, Thessaloniki-Napoli...)

The journey had to be made within our Summer Holidays of 5 weeks (we were both studying in Reutlingen at that time). The distance covered was approx. 12'000 km over mostly natural, bumpy roads. Meaning 30 days driving for 8 hours at an average speed of 50 km/h!
Heat, dust, break downs of the car, disorientation in the desert, the cold in Afghanistan mountains as well as the high attitudes made this trip quite a feat. Our very limited funds also added to the hardship and forced us to live very spartanic most of the time. A cosy hotel bed was a dream we could not afford and local roadside food was the rule. 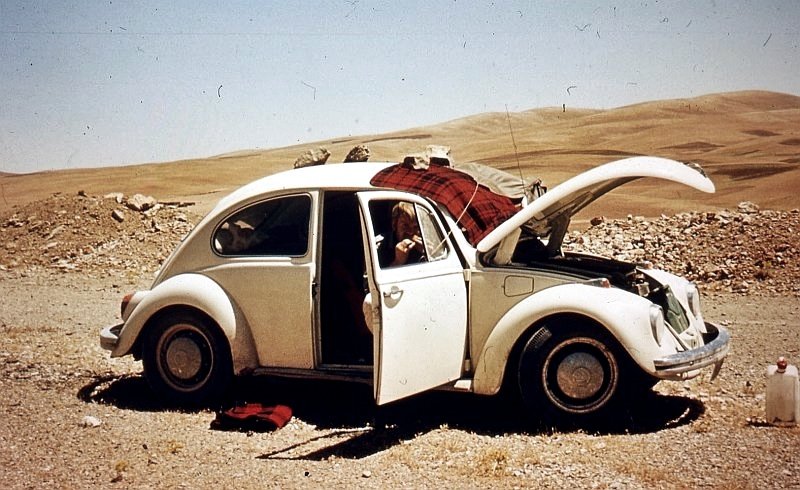 The stretch to Istanbul and through Turkey went on well. The "roads" however were sometimes quite horrible. While crossing into Iraq and went to sleep in an apparent "battle field" we were brutally waken up by Iraqi tanks. The commandant tried to explain that we were sleeping in a very sensitive zone and finally escorted us to his base where we could spend the rest of the night undisturbed. Baghdad was a rough place! While arriving the hanging of a couple of poor souls went on. We were therefore happy to find a cold bottle of "beer" and a retreat on the banks of the River Tigris. 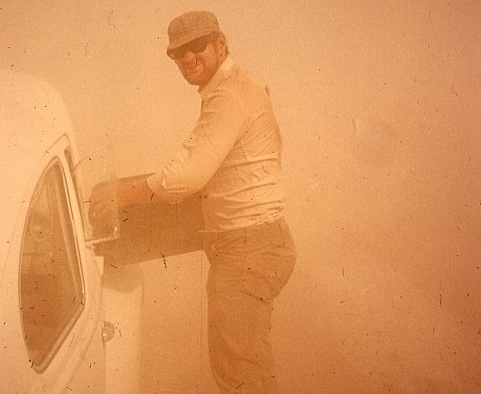 On the way, through the desert, from Babylon to Ur we encountered a massive sandstorm and things got rather unpleasant and dangerous. We missed a road crossing and got lost. Than the beetle developed (as in many other circumstances!) a mechanical fault and refused to start again. All this in the middle of desert! Fortunately, after some hours, a lorry came our way and we were told that we were way out of the track. So, after fixing the engine, we followed the truck all the way back and than proceeded to the Persian border. We crossed some "scenic" mountain passes and across a vast stone desert, to Quetta. Business as usual! From Quetta up the Indus to Islamabad and Rawalpindi, a short excursion to Srinagar and than via Kyber Pass to Kabul in Afghanistan. 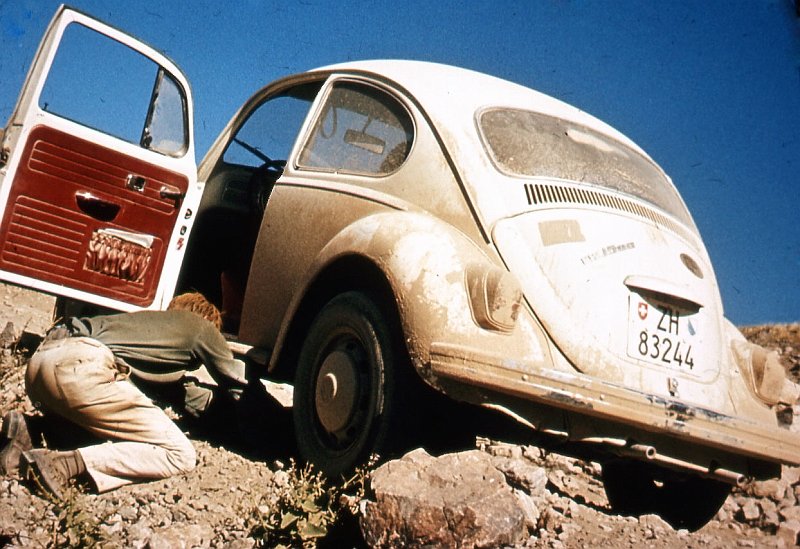 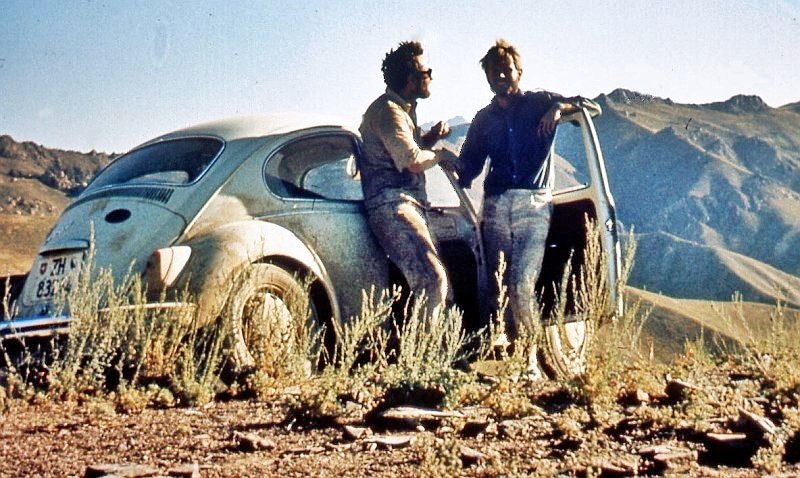 We decided to take the straight route across the Afghan mountains. Easier said than done! We passed the beautiful Band-e Amir Lakes and till Bamiyan we encountered (almost) no problem. Than the mountain passes got steeper and steeper. No "road" signs. The river crossing became more and more harrowing.
The high altitude did not help to boost the beetle's performance and we had to hand carry, many times, our load to the top of a mountain passes. In this way the beetle had just enough power got on top as well. The bends got sharper and steeper so that we drove one stretch to the next bend in forward gear and the next in reverse. After conquering a very nasty pass, we congratulated ourselves in the believe that the worst must be over. We considered ourselves lucky not to have to come from the opposite direction since the slopes seemed even much steeper on the way down. Suddenly, in a small hamlet there was the end of the road! That meant, all the way back and facing these horrible mountain passes from the direction we never intended! We where really shocked to say the least. Days of hard work for nothing and now all again in reverse! Our spirit was really on its lowest! Luckily we could purchase a drum of fuel and than we set back to Kabul. Underway in an obscure joint, we where eaten by bedbugs and that was certainly no fun. Finally Kabul again and we took the "easy" route via Kandahar to Herat. Than passing the Mt. Ararat, Ezurum and Trabzon. There for the first time we had a bitter argument among us. Considering what we went through in the last weeks, this was no surprise. We settled our differences and continued to Ankara and Istanbul. From there it was easy "sailing" and we felt like on holidays! Greece, Italy and finally back home. It was truly a memorable and epic trip which we will remember forever!